Possibly The Worst Duo Ever ? 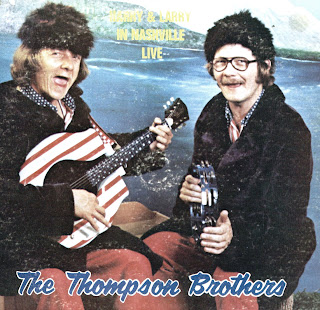 For your listening, or non listening pleasure, I present to you the Thompson Brothers, Harry & Larry. According to the back of the album, "This Thompson Brothers album is the result of the funniest recording session ever produced in Nashville. This hilarious event occurred one October night in 1977 in Laurel Tree Studios". The only thing funny is, you can't understand them !. Plus obviously, low and broke on funds, one of them plays, what they call a "Comodian". That's what I said a "Comodian". Taken straight from the outhouse, the toilet seat now plunks a different type of music. I've searched the world wide web over and can find no trace of them or any information on them on the internet. Maybe that's a good thing. So here they are the Thompson Brothers as seen on Hee Haw !. By the way that's their only claim to fame !.
Posted by Randall the Record Restorer at 11:46 AM 1 comment:


Yes sir, the rage of 1958, the One Eyed, One Horned, Flyin Purple People Eater. A song that kick started a radio station in Louisville, WAKY. 24 hours non stop, it was played. I'm sure people were sick of hearing it. The artist was Sheb Wooley who recorded many a song, but none clicked like that one with all America. Later he would record under the name Ben Colder, and score a few more hits such as "Almost Persuaded #2 and "Harper Valley (Later That Same Day) in the mid 60's". But ka winky dink, here's one you may not know about, the "Who Who Wallidinks". It was a follow up in the vein as "Purple People Eater". But the catch is, they live in the ground and don't fall fall from the sky. And this song stayed buried for many a year, until now. But by golly, "Do the kids go surfing in their baggy shorts and do you go into orbit as we've heard report ?"

Posted by Randall the Record Restorer at 6:54 PM No comments:

The Highway To Heaven

Posted by Randall the Record Restorer at 6:53 AM No comments:

Sometimes there are songs that are huge hits, that get parodied. Sometimes, one, two or three different parodies occur. In 1960, there was no bigger song than "Big Bad John".

It was hotter than a two dollar pistol, you might say. One of my favorite parody versions of this song was by Ben Colder, the staggering alias of Sheb Wooley. "Big Sweet John", was a minor hit for Wooley, err, Colder, Scuse Me.

This parody version, takes on a female slant as "Big Bad Jane" and is sung by the Four Saints. The four who ?. That's right, you haven't heard of them as well. 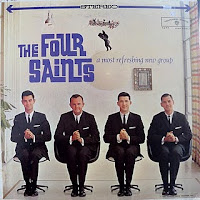 Well, here's what I found on them...  On May 17, 1961, after completing four years as a special unit with the United States Air Force Band. The Four Saints made their first professional appearance on the Ruth Lyons 50-50 Club show, WLW-TV, Cincinatti.

Ruth Lyons, amazed at their tremendous versatility and talent, stated then: "Positively great! There is no place for you to go but UP!".

Posted by Randall the Record Restorer at 10:50 PM 1 comment:

Oh those crazy 60's.  A dance a minute, "The Twist" "The Frug", "The Mashed Potato", and the "Lurch". That's right the "Lurch". Ted Cassidy, famous of the "Addams Family" as their faithful servant had his own dance. 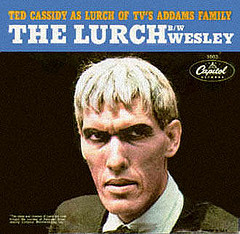 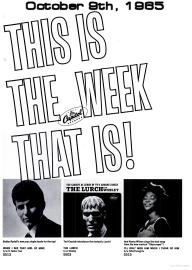 "The Lurch" was backed with "Wesley". This was Ted actually doing a great recitation as himself. Heres a
clip of him performing that on "Hollywood A Go Go"


As far as I have researched, Ted never did a full LP, just this 45. Ted outside of the "Addams Family" was a voice over man. From Wikipedia... Cassidy began doing character voices on a recurring basis for the Hanna-Barbera Studios, culminating in the role of Frankenstein Jr. in Frankenstein Jr. and the Impossibles series.

He was the voice of the hero in the Chuck Menville pixillated short film "Blaze Glory (1969)" in which his already deep voice was enhanced with a deep reverb & echo to give the character an exaggerated super-hero sound. Cassidy also voiced Ben Grimm aka The Thing in the 1978 animated Fantastic Four.

Cassidy went on to perform the roars and growls for Godzilla in the 1979 cartoon series that Hanna Barbera co-produced with Toho. His was the basis for the sinister voice of Black Manta, as well as Brainiac and several others on Super Friends.

Cassidy also narrated the opening of the TV series The Incredible Hulk and he also provided the Hulk's growls and roars.

Sadly, Cassidy was a giant of a man 6 foot 9, to be exact, and due to his large size, had some health issues. He suffered from those issues as he grew older, and died at the age of 46 from complications following open-heart surgery.

Fellow actor Sandra Martinez assisted and took care of him during his final years. Cassidy's remains were cremated, and later buried in the backyard of his Woodland Hills home.
Posted by Randall the Record Restorer at 10:39 AM 1 comment:

Don't We All Wish We Could Put The Hearse In Reverse 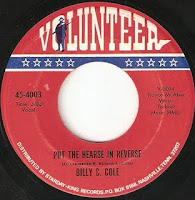 Billy Cole was born in a place called Short Track, NY, his career in country radio covered a long track in that it encompassed 40 years when he retired in April, 2000. Launching his impressive run in the medium at Greenland Air Force Base in Sondestrom, Greenland.

Through the years, Cole served as the national voice for major clients such as Roto-Rooter, Massey-Ferguson, Pioneer Seed, John Deere and International Harvester. As a country singer, he recorded for Chart, Mega, Volunteer and Twin Town Records where he was produced by Pete Drake and Waylon Jennings.

As a songwriter, his songs have been recorded by Stonewall Jackson, Webb Pierce and W. B. Stokely. During the mid-70’s, Cole hosted the “Country Call-In” show from WHO in Des Moines which played host to numerous country greats.

His charitable undertakings were concentrated toward the “Kids With a Wish” Foundation, which he helped fund for years with his Labor Day Weekend Softball Charity Tournament and his bluegrass concerts at the fairgrounds in Winterset, IA.

Inducted into the Country Music Disc Jockey Hall of Fame in 2002, Billy Cole was a classical example of the phrase he used to end his show with each day, “The best way to have friends is to be one yourself.” Billy passed away March 8, 2007.

So let's all hear and put the
"Hearse In Reverse"

Posted by Randall the Record Restorer at 11:08 PM No comments: 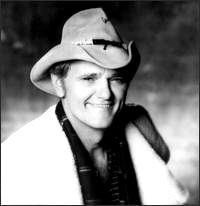 Leroy Pullins is pretty much the definition of a novelty one-hit wonder -- a singer who patterned himself after Roger Miller, a move that resulted in one moderately big country hit, "I'm a Nut," in 1966, and a host of other, similar tunes in the next few years, but few other hits. Not much is known of Leroy Pullins' life and career -- all information comes from Colin Escott's liner notes for Bear Family's 2007 CD I'm A Nut, a collection that contains all existing Pullins sides and credits a 1984 obituary written by Valarie Honeycutt for the Lexington Herald Leader.

Pullins was born Carl Leroy Pullins on May 12, 1940, in Berea, KY. He began pursuing a musical career in his teens, assembling a rock & roll band called the LeSabres when he was 19. Once the group fell apart, Pullins moved to Nashville, where he was signed to Kapp Records, a subsidiary of Decca, in 1966. He was signed with the idea that he would capitalize on Roger Miller's success, which he did quite successfully with his first single, "I'm a Nut," an original tune that went all the way to 18 on the country charts.

A full album also arrived in 1966, with a second arriving the next year, but that album and its accompanying singles went nowhere. As success started to dry up, so did Pullins' writing, so he decided to retire from the music business, moving back to his hometown of Berea where he became a fireman.

He stayed there until his death from a heart attack in May 1984 at the age of 44. A few months later, Bear Family issued an LP called I'm A Nut (this was not a deliberately posthumous release; it was planned before his death), and that was the only Pullins release in circulation for years until Bear Family issued a different compilation, also called I'm A Nut in 2007. ~ Stephen Thomas Erlewine, Rovi 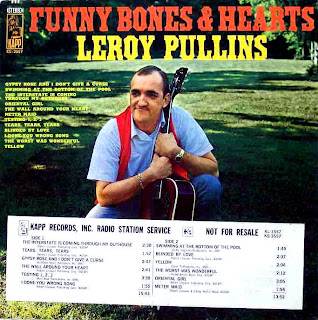 So in honor of Leroy Pullins, we won't play his hit, Remember, I said obscure. Here for your enjoyment from the LP above is


"The Interstate Is Coming Through My Outhouse"

Posted by Randall the Record Restorer at 11:13 AM No comments: